The SCRC invites you to explore manuscripts, university archives, rare books, and artifacts related to women and to engage with the achievements, struggles, and representations of women throughout history. 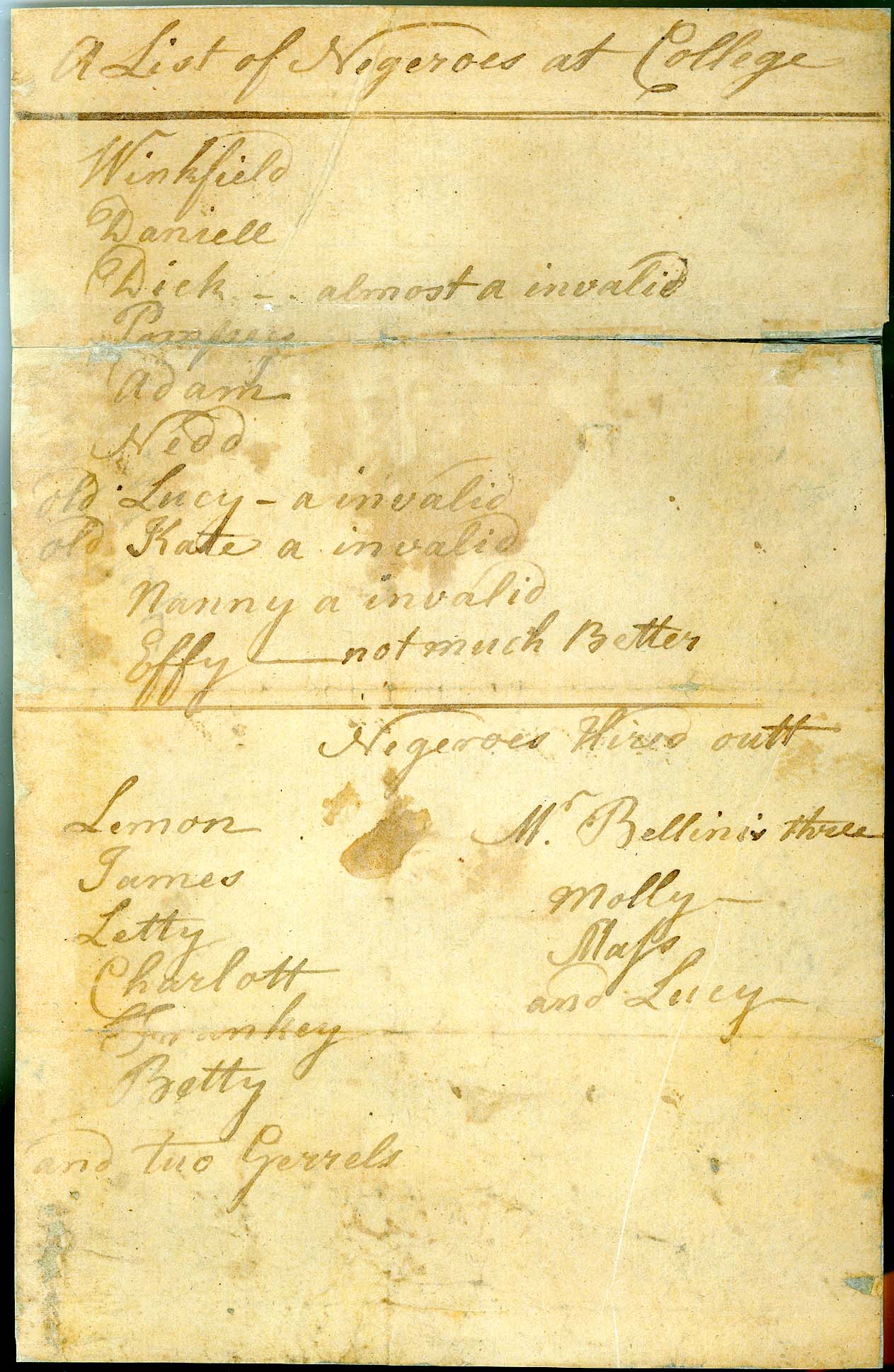 While a nexus of education reflecting and giving shape to early ideas of freedom, race, equality, and citizenship, William & Mary likewise played its own significant role in perpetuating slavery and racial discrimination. In 1718, William & Mary purchased Nottoway Quarter, a nearby plantation, and enslaved 17 individuals to raise tobacco for the school's profit. This early documentation of W&M's relationship with slavery preludes a long history of the university enslaving Black individuals—men, women, and their children—and exploiting their labor. While not all individuals enslaved by William & Mary have been identified, early surviving manuscripts, such as the List of persons enslaved by the College of William & Mary, circa 1780 (UA 339), give a glimpse at the lived experiences of enslaved women, like "Lucy," "Kate," "Nanny," and "Effy." A fully digitized copy of this list is accessible on the W&M Digital Archive.

Learn more about the history of African Americans at William & Mary from The Lemon Project's Historical Timeline.

Coeducation at William & Mary began in 1918, but prospective women students sought inclusion before this formal inauguration. Among these women is Minnie G. Braithwaite, a Williamsburg local who petitioned the all-male university in October 1896 to allow her to attend chemistry lectures. In a 4 to 3 vote, the Faculty Assembly denied her petition and, six days later, rejected her request for them to reconsider, as well as another resolution that would have allowed women in Williamsburg to attend a broad range of science lectures.

Despite never matriculating at William & Mary, Braithwaite's courage and determination are still remembered on campus. In 1996, the Women's Studies Program (now called the Gender, Sexuality, and Women's Studies Program) hosted its inaugural Braithwaite Lecture, an annual event that memorializes the ambitions of Minnie Braithwaite by inviting guest speakers to present their research on issues of inclusion, gender equity, and justice.

Materials related to Braithwaite and her legacy are available at the Special Collections Research Center: 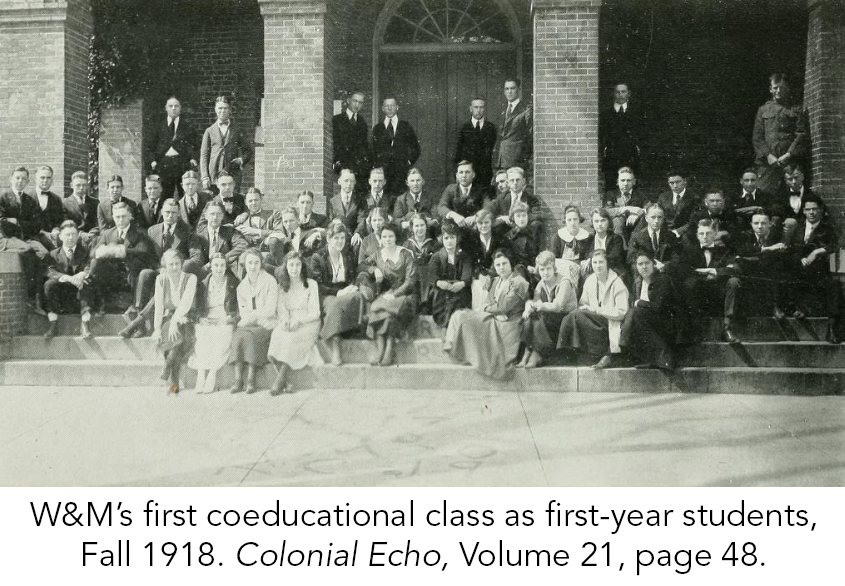 In September 1918, twenty-four women entered William & Mary as first-year students. Although these women were not the first to take classes at William & Mary, they were the first afforded the opportunity to matriculate and live on campus. As a result of admitting women, the university expanded its course offerings, including introducing classes in home economics and secretarial skills, and established the Office of the Dean of Women.

Resources related to women at William & Mary in the early twentieth century:

Admission of Women of Color

While 1918 marked the beginning of coeducation at William & Mary, initially only white women benefited from this change. Like many southern higher education institutions, William & Mary remained a segregated school until well into the 1960s. The SCRC is home to several university archives collections that document the obstacles women of color, particularly black women, faced in gaining admission into William & Mary and finding acceptance and community once on campus. 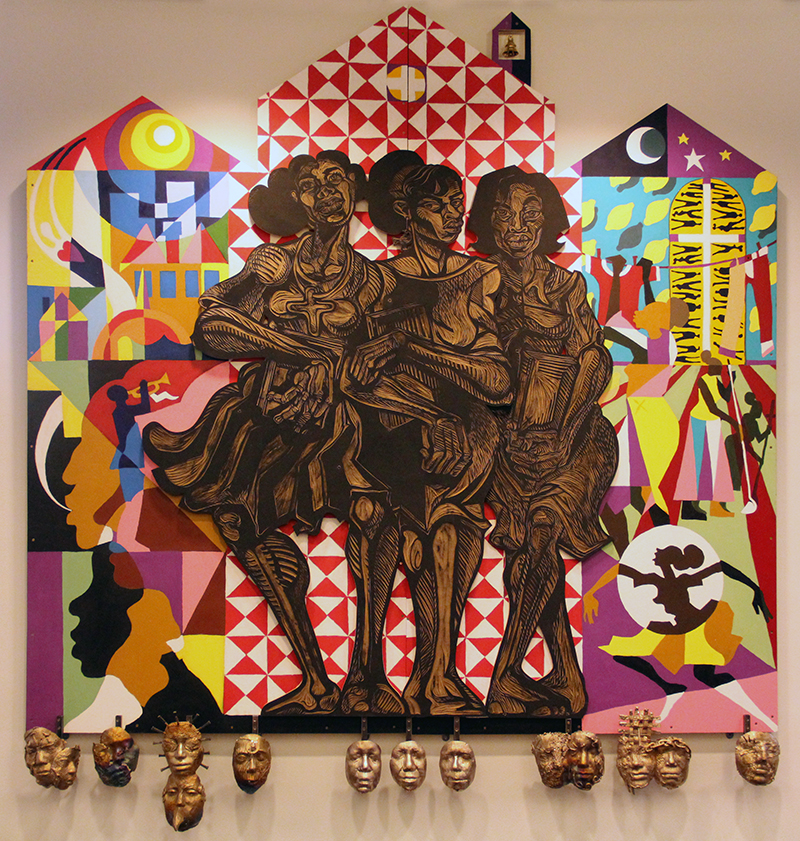 Lemonade: A Picture of America was created by Steve Prince, Director of Engagement at the Muscarelle Museum of Art, and participants in the Summer 2017 course Workshop on Black Expressive Culture to commemorate the history of African Americans at William & Mary. The mural depicts Strafer, Ely, and Briley as first-year students at W&M and is on long term display in the lobby of Swem Library.