Have Suggestions for More Titles?

We'd love to add more titles to this list of resources! Have a suggestion? You can email the guide creators.

This work is licensed under a Creative Commons Attribution-NonCommercial 4.0 International License. 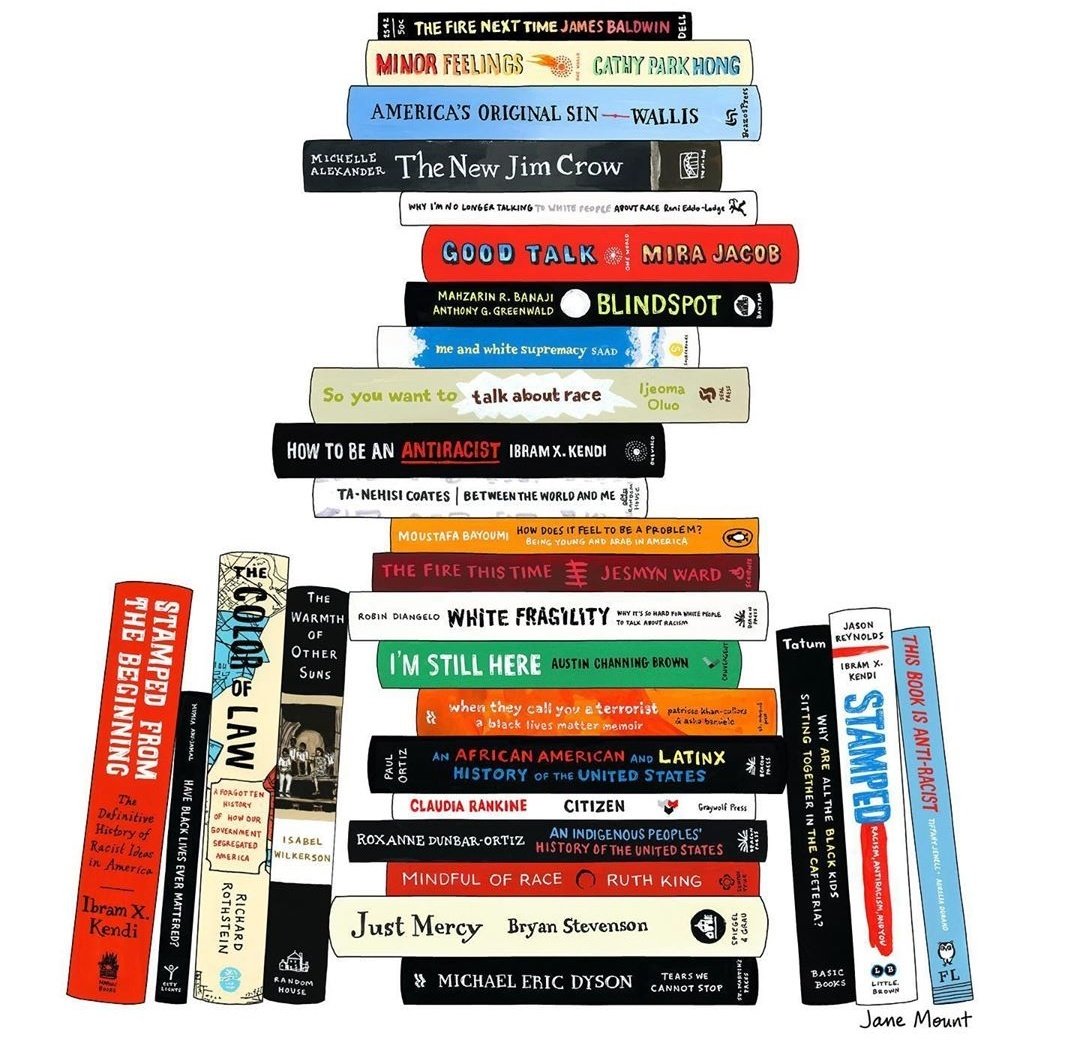 Racism is more than just the individual acts of a few evil folks, but is something that each person needs to consciously and continually address inside themselves. This list aims to serve as a source for self-education as to ways racism and white supremacy are built into the fabric of our society.

Ultimately, we hope this list will inspire you to act. Silence is an immense privilege, one that acts in direct service to fueling the system of white supremacy. By taking an active and academic interest in these topics, sharing your knowledge with your networks, and using what you learn to take direct measures toward social justice, you will be one step closer to bringing about the tangible change that we as a society so desperately need.

Remember: there can be no growth without discomfort.

Definitions For This Guide

Anti-racism: It is the active process of identifying and eliminating racism by changing systems, organizational structures, policies and practices and attitudes, so that power is redistributed and shared equitably (NAC International Perspectives: Women and Global Solidarity).

Critical Race Theory (CRT): is a theoretical framework that was first developed within legal studies in the mid-1980s. Scholars at Harvard and UC-Berkeley developed the critique as a means to examine how laws and policies can be vehicles for reinforcing the advantages of the dominant, affluent, and predominantly white culture while ignoring the needs and rights of marginalized and economically disadvantaged people. Critical race theory is just one lens or tool with which scholars of law and education have attempted to examine the causes and consequences of persistent racial inequalities. It studies the effects of racism at a systemic, rather than an individual, level (What is Critical Race Theory? Resources for Educators).

Intersectionality: Coined by Kimberlé Crenshaw, it is the theory that the overlap of various social identities (such as race, gender, sexuality, and class) contributes to the specific type of systemic oppression and discrimination experienced by an individual, and define how one is valued.

Institutional or Systemic/Structural Racism: refers specifically to the ways in which institutional policies and practices create different outcomes for different racial groups. The institutional policies may appear neutral on the surface but have an exclusionary impact on particular groups - their effect is to create advantages for white people and oppression and disadvantage for people from groups classified as non-white. Systemic racism is an unconscious (and often unrecognized) characteristic of our social, economic and political systems due historical white privilege (Aspen Institute).

Historical Trauma: first coined by Maria Yellow Horse Brave Heart, it is “a constellation of characteristics associated with massive cumulative group trauma across generations.” These experiences, shared by communities, can result in cumulative emotional and psychological wounds that are carried across generations (University of Minnesota Extension).

Lived Experience: used to describe the first-hand accounts and impressions of living as a member of a minority or oppressed group (Geek Feminist Wiki).

Model Minority Myth: The term “model minority” has often been used to refer to a minority group perceived as particularly successful, especially in a manner that contrasts with other minority groups. The term could, by its definition and logic, be applied to any number of groups defined by any number of criteria, but it is perhaps most commonly used to frame discussions of race. In particular, the model minority designation is often applied to Asian Americans, who, as a group, are often praised for apparent success across academic, economic, and cultural domains—successes typically offered in contrast to the perceived achievements of other racial groups (The Model Minority Myth, Harvard Law School).

Racism: a complex system of beliefs and behaviors, grounded in a presumed superiority of the white race. These beliefs and behaviors are conscious and unconscious; personal and institutional; and result in the oppression of people of color and benefit the dominant group, white people. A simpler definition is racial prejudice + power = racism (National Conference for Community and Justice).

Reparations: Reparations are many things. The dictionary definition of reparations are actions which are taken to "make amends, offering atonement, or giving satisfaction for a wrong or injury." This is not a new concept. In 1988, the US paid reparations to each surviving victim of Japanese descent who was imprisoned in concentration camps during WWII. In 1996, leaders in South Africa paid monetary compensation to apartheid victims. They also made efforts to redistribute white-own land. In 2020, the city of Asheville, NC voted to enact reparations by investing in their Black community. (Merriam Webster Dictionary; @soyouwanttotalkabout)

Unlearning: A process of removing ideas and beliefs, including incorrect or incomplete history or biases imposed on us through society, family influences, and schooling that we are unaware we’ve learned. Unlearning can be uncomfortable, but essential for us to evolve and do necessary anti-racist work (@so.informed)

Whiteness: Racism is based on the concept of whiteness—a powerful fiction enforced by power and violence. ‘Whiteness,’ like ‘color' and ‘Blackness,' are essentially social constructs applied to human beings rather than veritable truths that have universal validity. Whiteness is a constantly shifting boundary separating those who are entitled to have certain privileges from those whose exploitation and vulnerability to violence is justified by their not being white (Kivel, 1996, p. 19) & (Henry & Tator, 2006, p. 46-47).

White Privilege: The unquestioned and unearned set of advantages, entitlements, benefits and choices bestowed upon people solely because they are white. Generally white people who experience such privilege do so without being conscious of it (Peggy McIntosh – Unpacking the Invisible Knapsack).

White Supremacy: A political, economic, and cultural system, in which white [folks] overwhelmingly control power and material resources, conscious and unconscious ideas of white superiority and entitlement are widespread, and relations of that dominance and non-white subordination are daily reenacted across a broad array of institutions and social settings (Ansley, F.L., 1989)